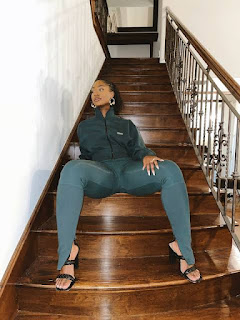 Are you searching online for Tems age, biography, real name, boyfriend and net worth? You’ve come to the right webpage. This page features everything you need to know about the fast rising Nigerian singer. Read on!

After she released her first single ‘Mr. Rebel’ in 2018, Tems has since gone into the spotlight which has led to her doing collaborations with popular musicians like Khalid and Davido in “Know your worth”, most recently with Wizkid and Justin Bieber in “Essence the remix” and on Drake’s Certified Lover Boy album on the song “Fountains”.

She also released another EP September 15, 2021 titled If Orange Was a Place. Which a lot of people have been vibing to recently.

Who then is Tems and what do you need to know about her? This article answers that fully.

Tems, is a Nigerian singer, songwriter and record producer. Her real name is Temilade Openiyi. She is currently 26 years old.

Tems was born to a Nigerian mother and a British-Nigerian father.

Her family moved to the United Kingdom shortly after her birth and her parents separated when she was 5.

She and her mother then moved back to Nigeria and resided in Ilupeju before moving to Lekki and later Ajah in the same Lagos State.

She attended Dowen College where she obtained her SSCE. She proceeded to study Economics in a university in Johannesburg, South Africa.

Tems learnt how to play piano at an early age after her talent was noticed by her teacher. She would practice singing with her brother’s guitar accompaniment.

In 2018, Tems composed and released her first single “Mr Rebel”.

In August 2019, she released a hit single “Try Me”. Try me became a popular hit track and was streamed over 2.8 million times on YouTube.

Tems released her first EP titled “For Broken Ears” on 25 September 2020. For Broken Ears featured her single “Damages” which became another follow up hit to Try Me.

In 2020, American Singer Khalid recruited her alongside Davido to feature in the Afrobeats remix of the song “Know Your Worth”.

Tems singing talent has not only been acknowledged by the music community in Nigeria but by American RnB champ Chris Brown as well.

In a post to his Instagram Story in late December 2020, Chris Brown, who had been impressed by her singing, had described her as “fire”.

That fire had led to several international invitations including one that took her to Uganda alongside fellow musician Omah Lay.

In Uganda, she was arrested alongside Omah Lay and taken to the slammer for violating COVID-19 protocols.

Her arrest led to an outcry on social media, causing her to trend alongside Omah Lay until her release.

In 2019, Tems was nominated for the Best Vocal Performance (Female) and Best Alternative Song in the 2019 Headies Award.

In September 2021, Tems was signed to RCA records and announced as Apple Music Up Next artist of the month.

On who her boyfriend might be, she had been silent. But then, in a recent chat with fans on twitter, while answering questions in a session tagged #AskTems, a fan asked her if she was in a relationship and she answered in the affirmative. But Tems’ response was not what many expected as she responded; “Yes, With Elohim”

Tems is not exactly noisy about the money but she has experienced rapid growth in her time in the Nigerian music industry. Her net worth is estimated at $460,000.

You can connect with her on social media;

Tems is one of the fastest rising Nigerian singers and songwriters. The young music artiste has been trending on the Nigerian social media space ever since her music with Wizkid.

Have you been searching online for Tems age, biography, real name, boyfriend or net worth?