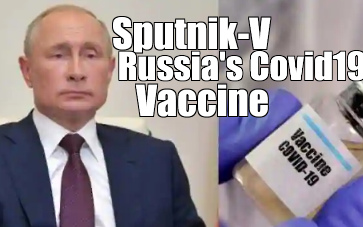 Have you heard about Sputnik-V, the new Russia’s Covid19 vaccine? This article features everything you need to know about the coronavirus vaccination.

Earlier this year, the world experienced the outbreak of this killer disease named Coronavirus or Covid19.

While experts and researchers around the world worked tirelessly to discover the cure, nothing yielded result. This led to many more studies by numerous scientists across the globe.

On the 11th of August 2020, Russian’s President, Vladimir Putin, said his country has discovered a vaccine for the virus. He proves this by saying that the vaccine has been administered to his daughter and she’s doing great.

This mean that Russia has broken records to become the first to grant regulatory approval for a vaccine after less than two months of human testing.

Though his claims came with a proof, researchers and some critics maintained that it needs to be worked upon to avoid administering vaccines that could cause serious health issues.

Here are some of the key facts you need to know about the vaccine:

·         President Vladimir Putin, claims that his country is the first in the world to bring lasting solution to Covid 19. He proves it by saying that his daughter has already been administered with it.

·         The vaccine is called SPUTNIK-V, as a reference to Russia’s early success in the space race.

·         The administration of the vaccine within Russia has already been approved though it is still on clinical test for safety and efficacy by the medical experts.

Concerns Over The Vaccine

He further states that the global body has met with Russian’s authority about their vaccine but “pre-qualification of any vaccine includes the rigorous review and assessment of all required safety and efficacy data.”

Scientists warn that there is no way this said vaccine could actually work without trial data. They are of the opinion that such unproven vaccine could cause more health problems.

According to Reuters, the assistant director of World Health Organization regional branch in America, Jarbas Barbosa said that the vaccine has not been approved by the world body and so, it should not be administered.

Russia Association Of Clinical Trials Organization is of the opinion that approving the vaccine by their President, will not make Russia the leader in the race rather it will end up exposing Covid19 patients to unnecessary danger.

Furthermore, the association urged their government to postpone the approval of the vaccine till trials has been conducted.

Regardless of the much warning coming from the WHO, Philippine President, Rodrigo Duterte, has saluted Russian’s president over their discovery and offered himself to be used for further trial in anticipation that the vaccines would be sent to his country without charges.

Scott Gotlieb, former FDA commissioner, told CNBC’s Squawkbox that Russia could not be ahead of US on Covid 19 vaccine development. He further stated that US won’t let them distribute those vaccine to the masses.

He clearly stated that he too won’t allow himself to be vaccinated because it has not been proven safe.

With the above information, will you be willing to have yourself vaccinated with SPUTNIK-V, Russia’s Covid19 vaccine?

Best Websites To Download Hollywood Movies For Free In Nigeria

Top 7 Scholarship Opportunities For Nigerian Students And Their Requirements

BBuyers Guide
Check out this list of best items for a one-handed persons. They’re some of the most helpful…
HHealth
Autism, also known as Autism Spectrum Disorder (ASD) is a condition related to brain development that impacts…
HHealth
Advertisements A medical doctor is a physician who holds a degree in Medicine, and is licensed by…
HHealth
Are you searching online for Nurses salary in United States, Canada, the UK, Germany or Thailand? Advertisements…
HHealth
Mesothelioma is a type of cancer that occurs in the thin layer of tissue that covers the…
HHealth
Do you want to know the benefits of neem leaves aka Dongoyaro? Advertisements This page will tell…