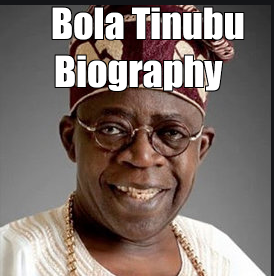 This article contains a brief biography of Chief Bola Tinubu, one of Nigeria’s most influential political figures.

The popular Nigerian politician Bola Tinubu was born in Lagos State. Apparently in the month of March 29 1952. His names are Bola Ahmed Adekunle Tinubu. In the early years of his life as a young boy he had his primary education at St John’s primary school, Aroloya in Lagos State.

His secondary education was achieved in Children’s Home School, in Ibadan. In 1975 Tinubu travelled to the United States. There he attended Richard J. Daley College, Chicago. After which he went to Chicago State University where he graduated with a Bachelor’s of science degree in accounting in the year 1979. Because of his excellent performance in school he had many job opportunities in the United States.

He later worked in Deloitte and Tounche after which he worked at General Telephone and Electronics (GTE). From there he went to work at Mobil, in the United Kingdom. He relocated back to Nigeria in 1983 and resumed work in Mobil, Nigeria as an auditor, he later rose to the position of a treasurer.

His journey into politics started in 1992. He was in a political party called “the people’s front”. And in 1993 he was elected Senate of Lagos West constituency. Being a Senate, Bola Ahmed Tinubu became the chairman of the following committee: Appropriation, Finance and Banking committee.

In the same year, Bola Ahmed Tinubu with some other political figures founded the National Democratic Coalition (NADECO). This was to rehabilitate the system of democracy. However and unfortunately because of the unpleasant actions and activities of NADECO Tinubu was sent to exile alongside his accomplice by the Military Dictator – Sani Abacha.

Shortly after the death of Sani Abacha, Ahmed Tinubu was reinstated. In 1998 Ahmed Tinubu contested and won the election of the office of the state Governor of Lagos State. As a Governor, Ahmed Tinubu made adequate investment in education, road constructions, and several housing units for the poor masses of Lagos state.

In 2006 he founded “The National Newspaper”.  The national paper was the first paper to be circulated over the 36 states of Nigeria. Ahmed Tinubu’s tenure as the Governor ended in 29th of May, 2007.

Bola Ahmed Tinubu is married to Oluremi Tinubu. She is currently the Senator of the Lagos Central Senatorial District. His mother Late Chief Abibatu Mogaji died on the 15th of June 2014. His son whose name was Jide Tinubu died in London after a heart attack.

He is a Muslim by religion and holds two honourable chieftaincy title. One of it is Asiwaju of Lagos while the other is Jagaban of Borgu Kingdom in Niger State.

Bola Ahmed Tinubu is a great man with great achievements. These achievements can also be seen in the form of his awards. Here are some of the awards accredited to him:

• Pillar of Culture in Africa at the AFRIMA Awards (2015)

As a man full of wisdom and knowledge, Tinubu is also well known for his political quotes. One of his quotes that got me thinking is:

We must make concerted efforts to banish poverty from Nigeria. To rid Nigeria of poverty is indeed a task that must be done. Some of his quotes are:

“Education is the greatest weapon against poverty. We cannot innovate without education, we need a leader that is a thinker and a doer.”

“No matter the political differences let us remember we are of one land, and the same national family.”

“The Hallmark of every Nation is in the wellbeing of its citizens.”

There are many more quotes from this Nigerian political figure, Bola Ahmed Tinubu and we celebrate his efforts so far for this great Nation.

This is the biography of Bola Ahmed Tinubu. I hope you enjoyed it.

Best Christian Universities Around The World