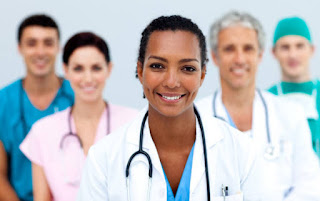 Are you searching online for doctors salary in USA, Canada, UK, Germany or Thailand?

This is the right page for you!

This article reveals how much a medical doctor working in each of these countries is paid per month and annually.

The Nature Of Work Of A Medical Doctor

A Doctor is a member of the medical profession; one who is trained and licensed to heal the sick or injured.

A Doctor typically works very long hours and has to be available for emergencies.

These hours are spent seeing patients in an office-based setting, running tests as well as interpreting them, prescribing medicine or treatments, doing rounds in the hospital, making notes on patient’s physical conditions, advising patients on how to stay healthy and talking to them about further treatment.

These Doctors deserve compensation for all the work they do, putting themselves at risk and sacrificing their time for others. And this compensation comes in form of a salary.

In our last post, we showed you how much Nigerian medical doctors are paid, both monthly and yearly. So today, we’ll be looking at how much the same doctors are paid in tier one countries like the UK, United States, Canada, Germany and Thailand too.

A person working as a Doctor/Physician in United States typically earns around 223,000 USD per year.

A person working as a Doctor/Physician in Canada typically earns around 281,000 CAD per year. Salaries range from 103,000 CAD (lowest average) to 474,000 CAD (highest average, actual maximum salary is higher).

A person working as a Doctor/Physician in Thailand typically earns around 228,000 THB per month. Salaries range from 83,600 THB (lowest average) to 385,000 THB (highest average, actual maximum salary is higher).

This compensation analysis is based on salary survey data collected from salary explorer.

These average salaries could include housing, transport, and other benefits. And the Salaries vary drastically between different Doctor/Physician careers.

Doctors salaries can vary widely by specialty, hospital ownership, geographic location and many other factors. Here are factors currently affecting doctors salaries, according to various reports.

While some specialties are traditionally compensated at higher levels than others, physician compensation is also affected by the rate of income growth over several years.

Physician compensation also varies based on group type, meaning whether physicians belonged to a single specialty or multispecialty group.

In the UK, increasing patient workloads and an increasing number of hours spent at work to accommodate this, but without a corresponding increase in earnings, is probably the main reason why physicians don’t feel fairly compensated.

For all countries, compensation for employed doctors included salary, bonus, and profit sharing.

Have you been searching on Google for doctor’s salary in USA, Canada, UK, Germany or Thailand?

I hope you find this information useful. Also check out other similar articles available on this platform.

Easybuy Phones: How To Get Any Smartphone Of Your Choice With An Upfront Of Less Than Half The Original Price

VAT Rate In Nigeria: Everything you need to know