Following his recent popularity, people have become curious and have been asking questions like Who is Mr. Macaroni?

How much is he worth? Etc. 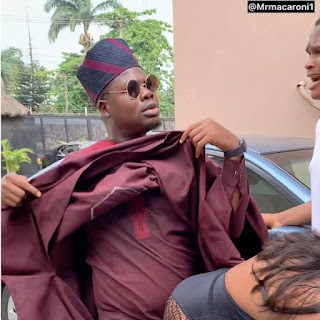 His father was a journalist and his mother an educationist, however, their names are unknown.

He completed his primary and secondary schools in 2004 and 2009, respectively.

His tertiary education was tumultuous. He attended 3 private universities where he had issues ranging from suspension to altercation with lecturers and even the school, before graduating with a degree in Theatre Arts and film studies from the Redeemers University, Osun State in 2019.

In his primary and secondary schools, he displayed his talents in the drama groups where he perfectly mimicked both fictional and non-fictional characters.

He began applying for movie roles while in the university and he was featured in several soap operas and movies among which are Super Story, Face 2 Face, Papa Ajasco, and Jenifa’s Diary.

Speaking in an interview, he disclosed that comedy was not his initial plan, but due to the infrequency of movie roles, he sought other means to make money and he was inspired to produce comedy skits after watching videos of Broda Shaggi and Maraji.

He started out playing the character of an old school teacher before developing the personality ‘Mr. Macaroni’.

In his words, he “chose the role of a sugar daddy because it represents a good percentage of naughty men in Nigeria” and it is seen in how Mr. Macaroni always loses his cool at the sight of a pretty girl and then exclaims his catchphrase “you are doing well”.

The videos portray real and current issues in Nigeria and Africa at large and he has featured many celebrities in his productions, the likes of Don Jazzy, Falz, Sola Sobowale, Chiwetalu Agu, Obi Cubana, Bovi, and AY to name a few.

Currently, he is one of the most sought-after online comedians with millions of views and followers across different social networks.

He is the founder of Mr. Macaroni Entertainment Ltd. He is also a scriptwriter and has written several movies and comedy skits.

He also runs a theatre troupe that has performed at different institutions and events.

Mr. Macaroni is not yet married and nothing is known about his love life. Nonetheless, he once revealed that he would give his virginity and pride to the right woman.

With that, we believe Mr. Macaroni’s wife will definitely be a very lucky woman.

The net worth of the comedian is estimated to be $161,000, which is converted to about N67 million as at the time of this article.

He has promoted brands such as Gulder, Dano milk, and Heirs insurance.

He has endorsement deals with myPaddi, 1960Bet, and Crystal Dental Care.

Currently, the exact number of cars or housing properties he possesses isn’t known, because the entertainer is silent about his possessions, but our findings reveal he has a Toyota Highlander and a Lexus GX 460.

He has numerous videos that can make you laugh out loud.

You can check out his youtube channel “Mr. Macaroni” for his videos.

I sincerely hope that your curiosity has been satisfied.

Thank you for reading, You are doing well! 😂😂😂

EEntertainment
In a time where being talented is getting rewarding by the day, you may want to try…
EEntertainment
Want to watch free Chinese drama movies online? Check out these websites listed here. Chinese dramas are…
CCelebrities
Are you curious about Tana Adelana? Do you want to know about her early years and career development,…
CCelebrities
This article features a brief biography of Mike Bamiloye, the founder of Mount Zion Film Industry. It…
CCelebrities
Want to learn about Broda Shaggi’s age, biography, real name, wife, parents, houses, net worth and best comedy…
EEntertainment
Are you searching online for GOTV customer care number, Whatsapp number or email address? You’re on the…