What Is The Meaning Of “Dorime” In Nigeria? Here’s Why Era’s “Ameno” Song Is Trending In Nigerian Nightclubs 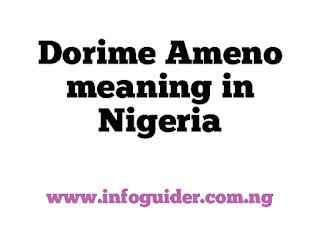 Here is the full meaning of “Dorime Ameno” and why the popular song is trending in Nigerian night clubs!

The word “Dorime” was gotten from the first line of the popular song “Ameno” by ERA. Though the word actually means “pleasant” or “pleasurable”, in Nigerian Pidgin English, “Dorime” is simply used to refer to an activity or event that featured extravagant spending.

Everytime you hear a Nigerian say something like “omo nobi small dorime dem do there o”, he is simply saying “money was spent there extravagantly”

The word is always associated with heavy spending, partying and showoffs. That’s why statements like “no go follow boys do dorime if you no get steady income” is one of the comic statements social media content creators make to warn against lavish spending.

“If you follow Obi Cubanas dem go do dorime for burial, Sapa go show you who be the real boss for house” 😂😂😂

That’s the meaning of dorime in chats today!

Is Dorime Italian? Latin or French?

No it’s not an Italian or Japanese word. It’s not Latin. It’s actually from the French inspired song Ameno by ERA. So it’s most likely ancient French, though many people argue that it is an ancient Latin word.

How Did Dorime Become A Trending Slang In Nigeria?

The word “Dorime” actually became a popular slang in Nigeria due to two reasons:

The first is the fact that the song “Ameno”  from where the word was derived, has grown to become one of the favourites of Nigerian DJ’s and party lovers.

The second reason is mainly because Nigerian social media comedians and content creators frequently use the song as the background song in their comedy videos. Especially the ones featuring heavy spendings.

Is Dorime Ameno A Catholic Song?

No, Dorime Ameno is not a Catholic song. Though it sounds like some of the Latin songs that are usually sang in Catholic churches, it has nothing to do with the church.

Is Ameno A Demonic Or Cult Song?

Calm your nerves Nigerians! The song Ameno by ERA is not a demonic song. Nothing in the lyrics suggests so. It’s not an occultic song like many of you think.

Take a look at a part of the lyrics of the song in English below and confirm for yourselves.

“I’ll save you from yourself
From the demons of the night
They promise fame and fortune
All that you eagerly desire.

I’ll save you from yourself
From those voices calling you they say
Sell your soul to Evil
Then you’ll be dancing forever.”

Now, how is that a demonic song? I’ll leave you to answer that…

“Dorime” is a popular Nigerian slang derived from the 1996 new age song “Ameno” by E.R.A.

The song is usually played when the big boys in Nigerian nightclubs and parties starts throwing the cash and spending heavily on “bottles”, another slang for expensive alcoholic drinks.

While no one can tell the exact language “dorime” was gotten from, it is most likely ancient French or Latin. In Nigerian Pidgin today, the word is mostly associated with “extravagant spendings to satisfy one’s pleasures”

I hope you find this useful. Kindly share this on social media with your friends!

Top 10 Tasty Snacks In Nigeria: Locally Made Snacks From Different Parts Of The Country

Cost Of IVF In US, Canada, Germany, UK, and Australia