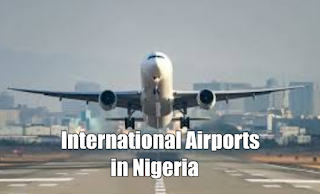 This guide features the a list of the international airports in Nigeria at the moment.

Aside road transportation, one major means transport in Nigeria is by air.

Airports have been successfully established in Nigeria, which has over time enhance the means of travelling by flight.

Nigeria has a total of thirty-one airports, however, the Federal Airports Authority Nigeria- FAAN oversees about twenty-six airports.

Popularly known as Lagos Airport, however was renamed after General Murtala Muhammed who was the fourth Military ruler of Nigeria.

It was constructed during the World War II and is located in Ikeja, Lagos State. The airport has both domestic and international terminals.

However, before the democratic election of Olusegun Obasanjo the airport was regarded as the worst airport in Nigeria due its lack of securities.

Following the democratic election the security improved greatly and it became a more safer airport.

Azikiwe airport is one of the oldest airport in Nigeria. It was as well named after President Nnamdi Azikiwe who was the first president of Nigeria.

The auto is suited in Abuja, the capital city of Nigeria. It has hubs for Air Peace, Arik Air, Ibom Air, Overland Airways, and Aero Contractors.

Akanu Ibiam International airport is suited in Enugu city the capital of Enugu state. The airport was named after late Akanu Ibiam who was apparently from Afikpo in Ebonyi state.

The Ilorin airport is located in Ilorin, Kwara State. It serves mainly Ilorin and still operates under the directives of Federal Airport Authority of Nigeria.

It is also one of the oldest airport in Nigeria. It also operates mostly Arik Air lines and Overland Airways.

Even though this airport is called Kaduna airport, Kaduna has an older airport that is still in operation.

Kaduna airport was opened in 1982. Airlines in this airport are; Arik Air, Azman air and Aero contractors.

This airport is operated by FAAN just like every other international airports.

The airport serves the northern parts of Nigeria, majorly Kano State. It was formerly the Royal Air Force Station before Nigeria gained her independence.

The airport gained its name after the politician- Aminu Kano. It is the oldest airport having its first aircraft in 1922.

This airport is suited in Omagwa, Portharcourt, the capital city of Rivers State.

The airport has been rated the busiest airport in Nigeria following the records of 1,081,587 passengers in 2007. It has both domestic and international terminals.

Sadiq Abubakar III International airport is located in Sokoto State, under the authority of FAAN.

Arik airlines are known for their daily operation from Abuja, as well as Aero contractors.

This article contains the 8 International Airports in Nigeria. You can choose any of them to travel at any given time. I hope you enjoyed reading.

TTravel
The route Lagos to Abuja is a commercially popular one. It takes about 10 to 12 hours…
TTravel
Abuja is the Federal Capital Territory, it is seen as the seat of governance in Nigeria because it…
TTravel
This page features a list of US Visa interview centres in Nigeria. You will also find various…
BBusiness
Here’s a detailed guide on how to ship goods to and within Nigeria using FedEx. Advertisements If…
TTravel
Want to know the cost of traveling with GUO Motors? Advertisements Check out the updated transportation prices…
TTravel
In this post, I will show you everything you need to know about DHL Nigeria and how…