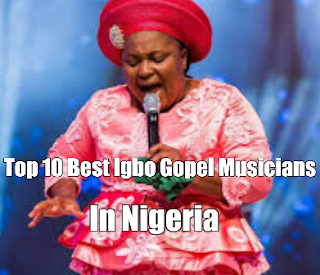 Would you like to know the current best Igbo gospel singers? Read on!

Music has also been the trend in Nigeria and even across Africa. Some of which come in different languages.

Igbo Gospel music is one that has inspired and drawn many people to God as well as give hope to the hopeless.

This article will show you the top 10 best Igbo gospel musicians whose talents and songs have made waves in Africa. They are listed below.

Evangelist Okwuoha Amaka popularly known as Chioma Jesus,  is one of the most famous Igbo gospel artistes in Nigeria and across Africa.

She has obviously used her talents in gospel music to draw many people to Christ.

She became popularly known as Chioma Jesus after the release of her song “Chioma Jesus” which was written in Igbo language.

She is a member of the Scripture Union Fellowship and desires to help young gospel artistes use their talent in serving God.

Chinyere has been a popular and talented singer. She is married with lovely kids and has also been invited for stage shows both locally and internationally.

One of the most famous male Igbo gospel musicians in Nigeria at the moment.  Prince Gozie Okeke is married to Princess Njideka Okeke.

He lives in Anambra state. His songs traits across the Eastern region of Nigeria.

However, there were negative rumours about his personal life as well as his marriage.

Despite the rumours, Gozie kept soaring high in his music career.

Samsong Uche who is based in Abuja is a wonderful gospel singer.

He is also a minister of the Gospel presently.

Benjamin has been able to attract many souls to God through his gospel music.

He is highly respected across Nigeria and currently lives in Aba.

Here is another popular musician in the Nigerian gospel music industry. He sings mainly in Igbo language.

Samuel is a good singer and has sang lot of songs. He is focused on using his music career to serve God.

He also once featured Prince Gozie Okeke. He is currently doing well for himself.

Although a clergy, Father Mbaka of Adoration Ministries Enugu (a Roman Catholic Church) is known to be a lover of music.

His songs are very popular and inspiring, used to encourage the heart of many Christians.

He also owns a ministry and currently lives in Enugu.

He is a top Igbo gospel musician currently living in Owerri.

Chinedu has released lots of Igbo gospel songs which have been a blessing to many people.

Aside from his albums, Israel also performs in church programs.

Do you wish to know about top Igbo gospel musicians in Nigeria?

I  hope this article meets you at the right time. Also check out Top 10 Richest Nollywood Celebrities (Male and Female)