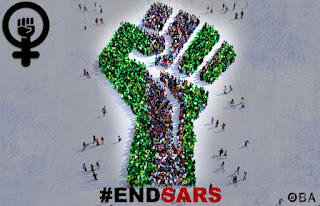 For close to two weeks, there has been massive protests going on across Nigeria. From the Federal Capital Territory (Abuja) to Lagos, Port Harcourt, Enugu, Makurdi, Awka, Benin City, Ughelli and several parts of the country, the youths have come out to demand an end to police brutality and extortion in the country.

These youths are saying enough is enough to indiscriminate killing of young people by the department of the police known as the Special Anti Robbery Squad (SARS).
For several years, reports of SARS calling innocent young people “yahooboys” or fraudsters and killing them in the process has gone unchecked, giving these police officers the impetus to do more.
Among those allegedly killed extorted and killed by SARS operatives are the names shown in the picture below.
The protests has also received massive support from various Nigerian clergies, celebrities, organisations and even the international community.
The youths are also demanding for better governance from the Nigerian leaders among other things.
Also Read: Beautiful Photos From Around Nigeria As The Country Celebrates Her Independence

NNigeria Tips
This article was written for the tourist seeking to vacation in a city with great sceneries and entertaining…
DDiscussions
What is the local name for Ginseng in Nigeria? You asked. Check out what Ginseng Root is…
GGeneral Tips
Are you searching online for best delivery services in Lagos? You’ve come to the right page. This article…
LLegal Tips
Are you searching for Nigeria’s most competent and successful lawyers to handle your case?   Then…
EEntertainment
Are you searching online for how to apply for BBNaija audition, 2022 edition? Are you interested becoming…
NNigeria Tips
Have you ever wondered who the richest celebrities in Nollywood are? Check out this list of the…