Eyo Festival: Everything you need to know about it 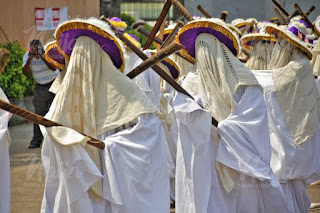 Also called Adamu Orisha play, the Eyo festival is a colourful display of the cultural richness of the Yoruba people of Lagos State, Nigeria.

If you’ve never been to or even heard of it, this article tells you everything you need to know about the Eyo Festival.

These masquerades are divided into 5 groups, among which, hierarchy exists.

The festival was said to be inherited from Ibefun, a town in Ogun state. Others say it was introduced to Lagos to entertain an Oba who married an Ijebu princess.

Significance Of The Eyo Festival

In earlier years, it was held to escort the spirit of a late King or a prominent Chief and to celebrate the installation of an Oba.

In recent times, it can be used to commemorate the death of an influential Lagosian.

It can be done on request by a Governor or an influential indigene, which usually attracts a fee.

It is also used as entertainment at State functions or occasions, just as the last one in 2017 was held to celebrate the 50th anniversary of Lagos.

It is a major source of tourist attraction for Lagos.

The festival does not have a fixed date, it could hold several times in a year as in 1903, or be absent for years.

The festival is held on Lagos Island alone.

A week before, usually on a Sunday, the Adimu Orisha (the most senior eyo) and his Eyo group appear in public with his staff, to inform the Governor and the public that the festival will occur the following Saturday.

All through that week, from Monday to Thursday, the ‘Opa’ would occur, a parade of a few masquerades from the other 4 groups.

Attire of the Eyo Masquerade

An Eyo is seen wearing an all-white attire, He wears an Akete, which is a hat bearing the colours of the ‘Iga’ (the palace house of a group of Eyo).
He carries his staff called ‘Opambata’ which also bears ribbons of the same colour as his Akete.

Only adult males robe as eyo, but sometimes a child eyo may be seen.
The Adimu Orisha is marked by his black broad-rimmed hat.

Early that festival morning, the Orisa Onika performs the ‘Gbale’ rites which are said to drive away evil spirits and usher in prosperity and blessings.

By 5 am, the masquerades assemble at the shrine of Orisa Eyo.

The Eyos gather to the sounds of the Gbedu and Koranga (only beaten during the Eyo festival) at the ‘para’ (a tent built with raffia mats) at Enu Owa in Lagos Island, from where they proceed to the Oba’s palace to pay respects and finally into the streets of Lagos An Eyo can walk 30 to 50 kilometers that day.

When an Eyo encounters people, he greets them with “E sunrunkunrun, we ma jugbon die” being interpreted as Don’t fear anything, have a taste of the palm tree” and he taps the individual on the shoulder with the opambata.
When given money, he prays for the person and recites the praise song of his Iga.

There’s nothing to fear about encountering an Eyo, except you are seen with the prohibited items or doing the prohibited activities around the festival area which includes:

Eyos have been known to beat people who do the above with their Opambata.

The festival culminates at the Tafawa Balewa Square where there would be thousands of people gathered ranging from tourists, locals, and dignitaries to watch the magnificent display of the Eyo.

The masquerades sing, dance, and display brilliant acrobatic moves as they walk around the Square.
It is such an exciting view.

This is everything you need to know about the Eyo festival. You should plan to see the next one for yourself.

Best Universities in Nigeria for Law

GGeneral Tips
Have you sought for how to open a post office box or a private mail bag in…
NNigeria Tips
Are you searching online for how to renew driver’s license in Nigeria? Check this out. In order…
NNigeria Tips
For close to two weeks, there has been massive protests going on across Nigeria. From the Federal Capital…
NNigeria Tips
It’s no doubt that oil and gas companies have helped boost the economy of Nigeria.  They have…
IInsurance
National Health Insurance, is a scheme of health insurance that assure a federal population against the high costs…
NNigeria Tips
Would you like to know the current best Igbo gospel singers? Read on!   Music has also…