Salary Of The Nigerian Army: Their Ranks And Logo/Symbols Included

Are you searching online for salary of the Nigerian Army? This is the right article for you. This page features Nigerian Army Ranks and Salary. You will also find their logos or symbols here.

The Nigerian Military ranks among the top 10 most powerful and respected military in Africa.

Within the country, Army officers are feared and accorded even more respect than lawyers, Police, Civil Defence, Nigeria Immigration officers and several others.

Other ways these questions are being asked on search engines include “what is the salary of Nigerian army by rank” and “how much salary for Nigeria army”.

Others have even narrowed it down to “salary of doctors in the Nigerian army”.

However you are asking these questions online, you will find answers to them in this very post. Just continue reading.

Unlike several career options out there, the Nigerian Military have a clearly defined salary structure.

The amount of money army officers receive as their salary, allowance or bonus, all depends on this particular structure.

No even a PIN can go to any officer outside that which is clearly stipulated or defined by the structure. The essence of that is to ensure that officers of the army gets paid accordingly and that those in the higher ranks do not deprive the junior ones what is due to them.

The military salary ensures that every army officer gets a true reward for his efforts and as at when due.

1. A commissioned officer in the Nigerian army is an experienced military officer who have achieved a higher rank as a result of academic studies, trainings, individual or group achievement, political appointment or selection by top ranked officers. Commissioned officers highly respected in the military and are well paid.

Below is a complete breakdown of that salary scale.

Here is how much Nigerian Military officers receive as salary based on their ranks:

Check out the logos or symbols of the different Nigerian army ranks below. 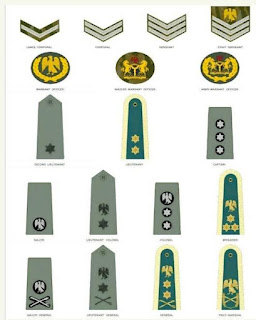 Nigeria Coat Of Arms: The Meaning, History And Pictures

Know more
NNigeria Tips
If you are interested to know about the ranks of  Nigerian navy, and salary structures, this post got…
NNigeria Tips
Advertisements We all know that gospel music come in styles and languages. In this article we…
NNigeria Tips
Advertisements Have you ever wondered who the richest celebrities in Nollywood are? Check out this list of…
EEducation
Are you searching online for best secondary schools in Nigeria? Or best High Schools in Nigeria? Advertisements I…
GGeneral Tips
Are you searching online for best delivery services in Lagos? You’ve come to the right page. This article…
NNigeria Tips
Also called Adamu Orisha play, the Eyo festival is a colourful display of the cultural richness of…