Nigeria is home to many influential preachers; from across different denominations and backgrounds.

There are certain of them who have leveraged multimedia to take the Gospel beyond their primary audience and into the larger world.

Now, people far away have the opportunity to follow their favourite preachers on local and satellite stations.

In this article, I bring to you famous TV preachers in Nigeria

List of The Most Popular TV Preachers In Nigeria

In no particular order or rank, these are some of the most famous preachers on television. 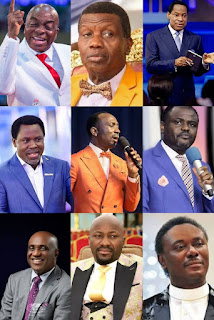 Pst. Enoch Adejare Adeboye joined the Redeemed Christian Church of God in 1973 and served as an interpreter before his ordination as a pastor in 1975 by Pa. Josiah Akindayomi.

He became the General Overseer of the church in 1981 and since then, the Church has grown in its number of members, branches, and host countries.

Also Read: Best websites to grow in your Christian faith

David Olaniyi Oyedepo was born on September 27, 1954, in Osogbo, Nigeria.
He was introduced to Christianity by his grandmother, whom he lived with, but he got born again in 1969.

He is the founder and General Overseer of the Living Faith Church World Wide.

You can stream the messages on YouTube, or watch them on Impact TV and Winners Chapel Int’l.

Christopher Oghenebrorie Okotie is the pastor of the Household of God Church International Ministries.

He is also a televangelist, politician, author, businessman.

Okotie has published books and is a regular contributor to several Nigerian newspapers.

Pst Tunde Bakare was born a Muslim but became a Christian in 1974.

He is the host of Moment of Truth, a weekly Radio and Television programme.

His Sunday sermons are always streamed live on youtube by 9 am.

He also began a television program called the Hour Of Salvation which is currently hosted on over 50 TV stations both locally and internationally.

Pst. Christopher Oyakhilome was born on 7 December 1963 in Edo State.

He was the first to pioneer a Christian-based television network from Africa to the rest of the world.

The Church has a satellite station, LoveworldSAT, as well as a live TV app.

He is the founder and leader of Power City International Church, Uyo, Nigeria, with branches all over the country.

His messages are broadcasted through the church’s television channel, KLN TV, his YouTube channel and Facebook pages.

He is the owner of the Celebration TV network where his sermons are live.

Dr. Paul Enenche is the founder and senior pastor of Dunamis International Gospel Center, a church he founded in 1996.

Pastor Paul Enenche was formerly a practicing Medical doctor before he got called into establishing
the ministry.

The Church has Dunamis Television and His sermons are also live on YouTube.

Before his sudden demise, Prophet TB Joshua was Africa’s most famous televangelist, healing minister and philanthropist.

He was the founder of the Synagogue Church Of All Nations (SCOAN), Lagos Nigeria.

His messages and healing ministrations are still aired through his television channel, Emmanuel TV, his YouTube channel and Facebook pages.

There are countless other preachers on TV and some you would like to add to this list, but these are some of the most famous TV preachers in Nigeria presently.