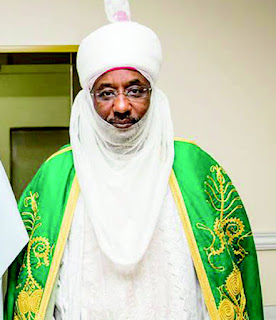 Most Nigerians remember the cursive writing on naira notes, some few years back, that read “Sanusi Lamido Sanusi” which was the signature and name of the Governor of the Central Bank of Nigeria.

Some others attach the name to the former Emir of Kano state.Whichever way, Sanusi Lamido is a very interesting personality and even with the tough road he’s been down on, he has attained success, and did I mention that he is wealthy? Well, he is.

This article unveils to you the Net worth of Sanusi Lamido.

Sanusi Lamido was born on July 31st, 1961 (just a year after Nigeria gained her independence). He was born into the royal family of the Sullubawa clan and as the grandson of Muhammadu Sanusi I (who was the 11th Fulani Emir of Kano).

He obtained his Senior Secondary School certificate at King’s College, Lagos in 1977.

He schooled in the prestigious Ahmadu Bello University, Zaria where he bagged a Bachelor’s degree and a Master’s degree, both in Economics in 1981 and 1983 respectively.

Soon after he acquired his M.Sc, he was hired as a merchant banker in Icon limited (a subsidiary of Morgan Guaranty trust bank of New York and the Baring brothers of London) and he progressed to be the head of financial services and the manager of the company’s office in Kano.

In 1997, he became an employee of the United Bank of Africa (UBA) where he worked in the credit and risk management division and later became the general manager of the bank.

In 2005, He became the director in charge of risk management in First Bank of Nigeria (FBN) and rose to be the chief executive officer of the bank in 2009.

June 1st of the same year saw his nomination as a Governor of the Central Bank of Nigeria.

His tenure was described as the ‘Sanusi tsunami’ because he was ruthlessly against corruption, financial crimes, and poor service delivery.
However, it came to an end in 2014, when he was suspended from office after whistleblowing on a $20 billion oil scandal.

Also Read: Top 10 richest Igbo Men in Nigeria and their net worth

The Banker becomes an Emir

In June of 2014, he succeeded the throne as the Emir of Kano and due to his  modernization and exposure, he led the state to achieve astonishing feats, such as:

The drafting of a new Muslim family law.
The construction of a 40,000 books library.
Promotion of the durbar festival internationally.
Increasing tourism to heritage sites.
Revamping the city’s cultural objects.

On grounds of several allegations, he was dethroned in 2020 by the Governor of Kano state and exiled to Nasarawa state.

Although he lost both positions as Emir and CBN Governor, it will be impossible to find him in poverty, don’t you think?
Considering his robust salaries over the years in top positions, his royal heritage, publications, and current place in the boards of top organizations.

His net worth is currently estimated at $80 million (which is converted to N32.8 billion).

For a man of his wealth and class, Sanusi Lamido is known to live modestly, only showcasing his love for exotic cars among which are a 2016 Rolls-Royce phantom VII and a Rolls-Royce Ghost.

I hope you find this information I’ve shown you on Sanusi Lamido’s net worth useful.