We all remember our kindergarten and primary school days when we stood for minutes screaming at the top of our lungs “States and Capitals…Abia” …and you know the rest.

However, if I told you to recite all 36 states, I’m sure you’ll miss out on some of them, Abia, Adamawa, Anambra…
Wait, isn’t there a state before Anambra?

For the sake of accurate information, this article gives you the Map of Nigerian states.

Full Photo Of The Map Of Nigerian States

Here is an image showing the full map of Nigeria. 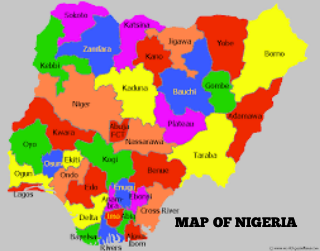 Nigeria currently has 36 states and a Federal Capital Territory. Check them out below:

1. Abia
Capital: Umuahia
Slogan: God’s own state.
Its commercial city is Aba.
It is the fifth most industrialized state in the country.

3. Akwa Ibom
Capital: Uyo
Slogan: Land of promise.
It has 31 local governments, an airport, 2 seaports, a library, and an information centre.

4. Anambra
Capital: Awka
Slogan: The light of the nation.
The city of Onitsha is its commercial city.

5. Bauchi
Capital: Bauchi
Slogan: Pearl of tourism.
The state has 20 local governments where over 50 languages are spoken.

6. Bayelsa
Capital: Yenogua.
Slogan: Glory of all lands.
It is one of the youngest and also the least populated state in the nation.

7. Benue
Capital: Makurdi.
Slogan: Food basket of the nation.
It is a rich agricultural land.

8. Borno
Capital: Maiduguri.
Slogan: Land of peace.
Borno is the homeland of the Kanuri people in Nigeria.

9. Cross river
Capital: Calabar.
Slogan: People’s paradise.
It is a major point of tourism for its plateau, monoliths, and festivals.

10. Delta
Capital: Asaba.
Slogan: The big heart.
Its economic centre is Warri.
Delta State is predominantly inhabited by the Urhobo, Ijaw, Aniocha-Oshimili, and others.

11. Ebonyi
Capital: Abakiliki.
Slogan : Salt of the nation.
It is inhabited and populated primarily by the Igbo, though there are several dialects spoken.

12. Edo
Capital: Benin City
Slogan : Heartbeat of the nation.
Benin city is the fourth largest city in Nigeria and the centre of the country’s rubber industry.

13. Ekiti
Capital: Ado-Ekiti.
Slogan: Land of honour and integrity.
The state has mineral deposits. It is also buoyant in agricultural and water resources.

15. Gombe
Capital: Gombe.
Slogan: Jewel in the Savannah.
It is a multi-ethnic society with Fulani as the majority.

17. Jigawa
Capital: Dutse
Slogan: A new world.
It is the 8th most populated state and the economy is dependent on agriculture.

18. Kaduna
Capital: Kaduna
Slogan: Centre of learning.
The fourth-largest and third most populous state in the country.

19. Kano
Capital: Kano
Slogan: Centre of Commerce
It is the second-most populous state in Nigeria. The state has developed a diverse economy.

20. Katsina
Capital: Katsina
Slogan: Home of Hospitality.
It has 34 local governments and is the 5th most populated state.

21. Kebbi
Capital: Birnin Kebbi
Slogan: Land of equity.
The state is one of the major producers of rice.

22. Kogi
Capital: Lokoja
Slogan: Confluence State.
It is the only state that borders 10 states. Agriculture is the mainstay of the economy.

23. Kwara
Capital: Illorin
Slogan: The land of harmony.
Agriculture is the main source of the economy.

24. Lagos
Capital: Ikeja
Slogan: Centre of Excellence
It has the smallest area of land and the largest population of people.

25. Nasarawa
Capital: Lafia
Slogan: Home of solid minerals.
The state has agriculture as the mainstay of its economy.
It has the highest falls in Africa.

26. Niger
Capital: Minna
Slogan: The power state
It has the largest area of land.
3 of the country’s hydroelectric power stations are found there.

27. Ogun
Capital: Abeokuta
Slogan: The gateway state.
It is a hub for industrial estates and manufacturing companies.

29. Osun
Capital: Osogbo.
Slogan: The land of virtue.
The state has 5 sub-ethnic groups as well as people from all over the country.

30. Oyo
Capital: Ibadan
Slogan: The pacesetter state.
It is home to the first university in Nigeria.
The state economy remains largely agrarian.

33. Sokoto
Capital: Sokoto
Slogan: Seat of the caliphate.
It is populated by the Fulani and chiefly Muslims. Majority of the population practices agriculture.

34. Taraba
Capital: Jalingo.
Slogan : Nature’s gift to the nation.
The major occupation of the people of the state is agriculture.

35. Yobe
Capital: Damaturu
Slogan: Pride of the Sahel.
It has one of the largest cattle markets in West Africa and rich mineral deposits.

36. Zamfara
Capital: Gusau.
Slogan: Farming is our pride.
Agriculture and gold mining are the main occupations of the people of the state.

FCT
Slogan: Centre of unity
Abuja, the capital city of Nigeria, is located in this territory.
It has 6 area councils.
It has Hausa, Nupe, Gbari, and other languages.

Now you’ve seen the map of Nigerian states. Did you miss a few when you tried to recall them yourself? And hope no one on the list surprised you *winks*.

NNigeria Tips
Also called Adamu Orisha play, the Eyo festival is a colourful display of the cultural richness of…
GGrants and Funds
Are you among those whose shops were vandalized by hoodlums during the period of the #EndSars protests…
NNigeria Tips
We all know that gospel music come in styles and languages. In this article we will…
NNigeria Tips
Are you looking for the best teaching hospitals in Nigeria? You’ve come to the right place. Here…
NNigeria Tips
Are you searching online for Nigeria coat of arms? Do you want to know the meaning and history…
IInsurance
National Health Insurance, is a scheme of health insurance that assure a federal population against the high costs…