The North East used to be an administrative division of Nigeria in the 1960s, with its capital in Maiduguri. However, it was later divided into 3 states from which came other divisions and new states.

A few of us may not be able to name all North Eastern states in Nigeria. We usually just sum up everything as Northern states. But I’m going to increase your knowledge bank and show you the states that make up the North East region in this article.

About the North East Region Of Nigeria

There are six (6) states that make up the North East region in Nigeria. You’ll find listed here as you read on.

The region occupies less than one-third of Nigeria’s total area.

Recently, the turbulence in the region has affected the lives of people.

Currently, 3.4 million people are starving, over 2 million persons are internally displaced, and tens of thousands seeking refuge in Chad, Niger, and Cameroon.

The following are the states found in the North-Eastern region of Nigeria: 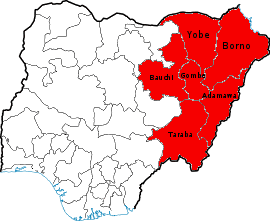 The state was created in 1991 from Gongola state and currently has 21 local governments.

It is a multi-ethnic state but predominantly inhabited by Fulani.

The people are majorly farmers, and producers of cash crops and food crops.

They are also involved in fishing, cattle rearing, and the export of cotton, peanut, dyed skins, and gum arabic.

The state has been badly hit by Boko Haram attacks; suffering looting, abductions, suicide bombings, and full on attacks on homes and Churches.

The current Governor of the state is Ahmadu Umaru Fintiri.

It was created in 1976 and inhabited by a large number of ethnic groups.

The economy is predominated by Agriculture and it is one of the country’s main cotton-producer.

It is known for its art, crafts, festivals, and traditional boxing and wrestling.

It is home to the Yankari National Park which is a major tourist attraction.

Bauchi State is currently under the threat of desertification and has been called to undertake better environmental remediation and conservation practices.

Maiduguri is its capital, major industrial centre, and largest city.

Borno has been at the centre of Boko Haram activities from killings, to bombings and kidnapping and currently, over 65,000 Nigerians have fled the state.

It was formed in 1996, from part of the old Bauchi State.

The state has 11 local government areas mainly inhabited by the Fulani, Bolewa, and other tribes.

The people are keepers of animals and also practice weaving and dyeing cotton.
The present Governor is Muhammad Inuwa Yahaya.

There is also livestock rearing, fishing, and other occupational activities.

Tourist attractions in the state include Mambilla Tourist Center, and game reserves in Gashaka and festivals.

Darius Dickson Ishaku is the Governor of the State.

The state derived its name from River Yobe. Its capital city is Damaturu and its biggest city is Potiskum.

Among other ethnic groups, the Kanuri and Fulani are prominent.

The State has rich mineral deposits.
and one of the largest cattle markets in West Africa.

Yobe has also been a victim of the Boko Haram insurgency and attacks.
Mai Mala Buni is the incumbent Governor.

Now you know the 6 North-Eastern states in Nigeria. So when asked, you can confidently answer.