How many local government areas are in Lagos State? You asked. You will find the answer and a list of them in this guide as you read on.

Lagos State was created on May 26th, 1967, and is currently the nation’s economic, financial and commercial capital.

It is located in the South-Western part of Nigeria bordered by Ogun on the north and east, and by the Republic of Benin on the West.

This article focuses on the megacity and gives you a full list of the Local Government Areas in Lagos State.

Lagos State occupies 3,345 square kilometres, making it the smallest state in Nigeria. However, it ranks as the most populated state with 24 million people.

It has 5 administrative divisions, which are further divided into 20 local governments Areas (LGAs).

Each division is either known for its historical significance, commercial strength, industrialization, or recreational and infrastructural provisions.

There are 20 LGAs in Lagos State. Below is a full list of them: 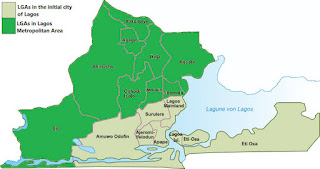 This is both the state capital and the second richest local government in Nigeria.

It has the Ikeja City Mall and the biggest International Airport in the country.

One of the campuses of the Lagos State University and the National Youth Service Corps permanent orientation camp are found here.

It is the largest local government in Lagos state and an agricultural area.

The LGA is a terminal for food items in Nigeria and a beehive of commercial activities.

It is a highly industrialised area and very populated too. The latter has resulted in overpopulation and the creation of slums.

It consists of 11 wards and has medium to large scale industries.

The most diverse printing press in Nigeria is located in Somolu. It is also very congested with high crime and poverty rates.

Historically significant as the pre-colonial slave outpost and where Christianity was first introduced.

It has 11 wards and important places like  the Alaba International Market, Iyana-Iba market, Navy town, and others

The LGA is large commercial centre and has attracted investors and industries from different states and countries.

Known as one of the densest places to live in globally.

It is an active commercial and energy centre.

It has the Lagos polytechnic, as well as many transmitting stations and tourist centres.

This is the most developed region in Lagos and the richest local government in Nigeria.

A well-developed area with good infrastructure and a thriving economy.

The local government is loud with entertainment. It contains the houses of many celebrities and the National Arts Theatre.

There are major seaports and terminals in Apapa, as well as the headquarters of This Day Newspaper and refineries.

It was formerly the seat of the federal government. The houses of rich people such as Aliko Dangote and Folurunsho Alajika are found here.

Epe is known for its hills as well as the farming and fishing occupations.

It has several estates and recreational centres, coastlines, and sandy beaches.
It is also industry inclined and houses the Dangote refinery and Lekki toll gate.

Note: In 2003, the local governments were further divided into local council development areas (LCDA) for easy administration and governance. However, there are still 20 Local Government Areas in Lagos State.

I hope you find this information useful. If you do, please feel free to share it on social media with your friends by clicking on any of the share buttons below.

Also Read: Where is Crude Oil found in Nigeria presently?

Where is Crude Oil found in Nigeria?