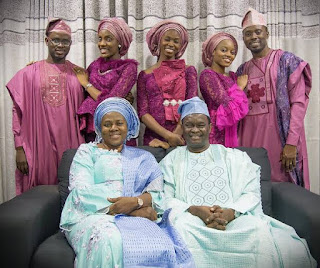 This article features a brief biography of Mike Bamiloye, the founder of Mount Zion Film Industry. It also reveals basic information about his family and his net worth. Enjoy the reading!

Mike Abayomi Bamiloye is a Nigerian film actor, dramatist, producer and director. He is a Drama Evangelist, Founder and President of Mount Zion Faith Ministries and Mount Zion Television.

Mike Abayomi Bamiloye was born on the 13th day of April, 1960 into the family of Pa Samuel Adejuyigbe Bamiloye and Mrs Grace Ebun Bamiloye of Ijebu-Ijesha descent, in Osun state. He was born in Ilesa a town in Osun State located at the southwestern part of Nigeria.

He lost his mother when he was 4 years old. His elder sister, Pastor. Mrs Felicia Adepeju Adesiyan looked after him till when he was old enough to look after himself.

He attended his secondary school at Mushin, Lagos state. From Form 1 – 2. And went back to Ile-Ife for Form 3 – 5.
Despite the struggle of Life that warrants him to travel around. He was focused on his studies. He gave his Life to Christ when he was 15 years old while he was in Form 3 at Ile-Ife.

He was trained at Divisional Teachers’ Training College at Ipetumodu where he began his career. He worked there as a teacher, he taught Grade 2 For almost a year. He loved teaching so, He went further to attend College Of Education so he could be a qualified teacher to teach the secondary school section.

While working as a teacher, he went back to College of Education to be directing their drama presentations and writing scripts for them.

His debut drama, titled Hell in Conference was staged at the National Christian Teachers Conference in 1986 at Ilesa in Osun State.

On the 5th of August, 1985 his proposal was accepted by Mrs Gloria Bamiloye which marks the beginning of their ministry (Mount Zion). He is married to Gloria Bamiloye, a Nigerian film actress and evangelist, with three children (Damilola, Joshua, and Darasimi Mike-Bamiloye).

Damilola Mike Bamiloye is the first born of the family, Damilola Graduated from Bowen University iwo Osun State. He is also in the movie Industry.

Joshua  Mike Bamiloye is the second born of the family, He stuied mass communications at Bowen University. He is a Singer.

Darasimi Mike Bamiloye was born on the 14th of May, she is the last born of the family, she is a fresh graduate of English Language from the prestigious Babcock University.

Mike Bamiloye has an estimated net worth of $1.6 million, an equivalence of ₦606 million. he is one of the best actors of Yoruba decent.

Mike Bamiloye is a Movie producer/founder of the Mount Zion Film Ministries.

Are you a fan of Mount Zion Movies? I’m sure you will find Mike Bamiloye’s biography and net worth discussed on this page very interesting.

List Of Universities Offering Food Science And Technology In Nigeria

Best Sites To Download Mount Zion Movies For Free In 2021

CCelebrities
Let’s talk about the winners of the Grammy Awards that took place in March, 2021.  Did you know…
RRichest People
Davido and his father, Adedeji Adeleke The name “Adeleke” is one of those known for wealth and…
RRichest People
Most Nigerians remember the cursive writing on naira notes, some few years back, that read “Sanusi Lamido…
RRichest People
Want to know the richest Alfa in the country presently? You’re at the right place. This page reveals…
RRichest People
Deputy Governors are the second citizens of a state, the position confers honor and prestige on the occupant.…
RRichest People
What does it feels like to go a day or two without bathing? Well, David Whitlock has gone…