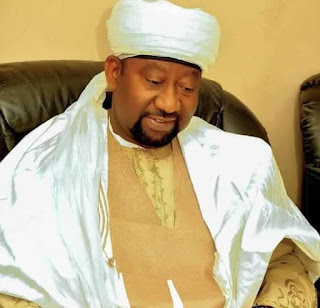 Are you searching online for Nasiru Ado Bayero net worth? You’re at the right page. This article features the biography, educational background, career, age, and net worth of the monarch. etc. Read on!

Who Is Nasiru Ado Bayero?

Nasiru Ado Bayero is the 2nd emir of Bichi. He ascended the throne from his brother Aminu Ado Bayero who was named as the 15th Fulani Emir of Kano, following the deposition of his nephew Muhammad Sanusi II by Governor Abdullahi Umar Ganduje.

Before his accession to the throne, he was the Chiroma of Kano Emirate and district head of Nassarawa during the reign of Muhammad Sanusi II.

Nasiru Ado Bayero was born on the 2nd of February 1964 (Age 57) in Kano, Northern region of Nigeria. He was born to the family of late Ado Bayero who was the longest serving Emir of Kano in the history of Kano.

He is the third son of late Ado Bayero and he was born at Gidan Dabo, Kano State. His elder siblings include Sanusi Ado Bayero who was the former Chiroma from 1990 to 2015 and Aminu Ado Bayero the 15th Emir of Kano which he later succeeded.

Nasiru Ado Bayero had his primary and secondary school education in Kano, after which he proceeded to study Mass Communication at University of Maiduguri, Borno State in 1987.

He is also a graduate of Harvard Business School. He also have a certificate in German language which he obtained in 1993.

Nasiru Ado Bayero had experience working in different countries. He first worked with Continental Merchant Bank Nigeria. He didn’t want to settle for less so he moved to Texas, United State where he worked with Coastal Corporation in Houston, Texas.

He later moved to London, England. There he worked with Hamlet Investment Ltd London. He is the chairman of Enclo Limited and 9 Mobile Nigeria.

Bayero was appointed as Tafidan Kano and district head of Waje by his late father, the 13th Emir of Kano On the 6th of May 1994, and later transferred as district head of Nassarawa local government, and then to Tarauni on the same status.

He was later promoted to Turakin Kano. In 2015, Muhammad Sanusi II who is his nephew and also the 14th Emir of Kano appointed him as Chiroma of Kano.

Nasiru Ado Bayero net worth is estimated to be $5 Million. He is a successful businessman and monarch, although his basic source of income is mostly from being the Emir of Bichi.

An emir is a prince, commander or other leader or ruler in an Islamic nation. It can also mean a descendant of Prophet Muhammad.

Bayero ascended the throne On the 9th of March 2020 but he was coronated on the 12th of March 2020, following his brother Aminu Ado Bayero appointment as the 15th Emir of Kano. He is from a very wealthy royal family in Nigeria.

I hope you find this information useful. If yes, please feel free to share

RRichest People
Atiku Abubakar is a top Nigerian politician. He is a former vice president of Nigeria and the presidential…
NNigeria Tips
Advertisements Have you ever wondered who the richest celebrities in Nollywood are? Check out this list of…
RRichest People
From an ordinary apprentice in a motor spare parts shop, Cletus Ibeto (chairman, Ibeto Group) rose to become…
RRichest People
Tony Elumelu, fully named Tony Onyemaechi Elumelu, is the founder Tony Elumelu Foundation. The chairman United Bank for…
CCelebrities
Want to know more about the popular Nigerian comedy skit maker, MC Lively? You’ve come to the right…
RRichest People
This page features the top 10 most powerful kings in Africa. You can as well refer to them…