The Richest Deputy Governors in Nigeria 2022

Deputy Governors are the second citizens of a state, the position confers honor and prestige on the occupant. But the number two position has also been described as an incurable frustration, judging by the power relations between them and the governors.

Who Are The Richest Deputy Governors In Nigeria Currently?

The following are the top wealthiest Deputy Governors in Nigeria presently: 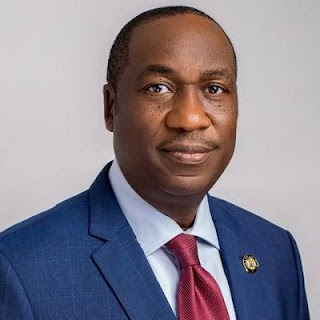 Femi Hamzat (born September 19, 1964) is a Nigerian politician who serves as the Deputy Governor of Lagos State.

He was born in Lagos, Nigeria into the family of Late Oba Mufutau Olatunji Hamzat and Late Alhaja Kehinde Hamzat from Iga Egbe, Lagos state.

He had his primary education at Odu-Abore Memorial Primary School, Mushin, Lagos State, Nigeria and his secondary education at Olivet Baptist High School, Oyo state, in the Southwest region of Nigeria.

In 1992, he had his PhD in System Process Engineering at Cranfield University, England.

In Oando Plc., he served as the Chief Information Officer and Group Head IT Strategist.

Hamzat was appointed as Special Adviser on Works to the Honourable Minister for Works, Power and Housing, Mr. Babatunde Fashola in 2015.

In September 2018, he resigned that role to contest in the Lagos state gubernatorial elections.

After a long-fought primary, Dr. Hamzat emerged as the running mate for Babajide Sanwo-Olu for whom he had stepped down during the primaries.

Both men ran together a campaign that went to different parts of the state. On March 10, 2019, after the election, Dr. Hamzat was declared Deputy Governor-Elect of Lagos State by the Independent National Electoral Commission and presented a Certificate of Return.

Dr. Hamzat emerged the winner of the fifth edition of the Lagos State Man of the Year Awards in September 2013.

He is one of the richest Deputy Governors in Nigeria today

Rt. Hon. Sir, Ude Oko Chukwu (FCA) is a Nigerian accountant and politician who currently serves as the Deputy Governor of Abia State after he was elected into office in 2015 under the platform of the People’s Democratic Party.

Prior to his swearing-in as Deputy Governor, he had served as the Speaker of the 5th Abia State House of Assembly.

Ude was born on 1 January 1962 into a Catholic family in Etitiama Nkporo, a town in the Ohafia local government area of Abia State.

Ude served as an accountant for SMACS Computers and General Manager, CONTECH Ventures Ltd. between 1988 and 1996 before he went on to establish Chukwu Ude Oko Chukwu and Co. (Chartered Accountants) in 2001. He is a fellow of the Institute of Chartered Accountants of Nigeria (FCA).

He became politically active in 2001 and in 2003 won a seat in the Abia State House of Assembly, representing Ohafia North Constituency.

He was also elected Speaker of the 5th Abia State House of Assembly by Theodore Orji in 2011, a position he held until his election as Deputy Governor of Abia State.

She has held various important offices at the Rivers State Ministry of Health.

During her service, she assumed the positions of Director of Public Health Services, Acting Commissioner, Director-General and Permanent Secretary.

She achieved prominence first in 1995, as Secretary to the Government of Rivers State before serving as Head of Service of the state.

In December 2014, Ezenwo Wike selected her as his running mate in the 2015 election. She was elected Deputy Governor and assumed office on 29 May 2015.

He is among the richest Deputy Governors in Nigeria currently.

Nasir Yusuf Gawuna is a Health personnel, businessman and a politician who is the Deputy Governor of Kano State.

Before his appointment Gawuna was the Commissioner Kano State, Ministry of Agriculture, since 2014 he was first appointed as a commissioner by former Governor of Kano State Engineer Rabiu Kwankwaso.

Gawuna is the Chairman of Kano State Taskforce Committee on Covid-19.

He also was chairman of Nassarawa Local Government Area for 8 years under the defunct All Nigeria Peoples Party ANPP.

Rauf Olaniyan (born 25 February 1960) is a Nigerian politician, civil engineer, and farmer. He serves as the current deputy governor of Oyo State.

He joined the People’s Democratic Party as the running mate to Engnr. Seyi Makinde for 2019 Gubernatorial Election in Oyo State, Nigeria.

He is the managing director of West Midland Construction Company and chairman and chief executive officer of Blue Line Construction Services, Ibadan.

He moved to the East for his University Education at the University of Nigeria, Nsukka, and then Anambra State, Olaniyan studied Civil Engineering. He graduated with the class of 1985.

He left Nigeria to continue his studies in the United Kingdom, Belgium and the United States of America.

Engr. Olaniyan has served at various offices for the Local government, State and Federal Government in Nigeria.

For about three decades, he has worked in the civil service of Oyo State for different administration. He retired in 2011 as a Permanent Secretary in Oyo State civil service.

He is one of the top wealthiest Deputy Governors in Nigeria now.

He was elected as the running mate to Governor Samuel L. Ortom in 2015 under the All Progressive Congress (APC).

He is an engineer, a management consultant and a politician.

From 1971 to 1975, he studied at the Kaduna Polytechnic, Kaduna, before leaving for the United Kingdom, where he attended the Cranfield University, Bedford, England, between 1976 and 1978.

Between 1980 and 1984 he was at the University of Ibadan before proceeding to the Ash ridge Management College in England for postgraduate studies in 1989.

He came to public limelight in Benue State when he contested for governor on the platform of the Social Democratic Party, SDP, and thereafter served as special adviser to Governor Moses Adasu from 1992 to 1993.

Abounu was appointed commissioner for water resources and environment by Governor George Akume in 1999; re-appointed and assigned to the Ministry of Solid Minerals, where he served from August 2003 to June, 2005.

He chaired the board of the Nigerian Television Authority between 2009 and 2011.

Consequently, He was inaugurated as the deputy governor of Benue State on 29 May 2015.

In 2018 he moved with Governor Ortom to the People’s Democratic Party (PDP) and both were reelected in March, 2019.

Final Words On The Richest Deputy Governors In Nigeria Presently

The Richest Governors in Nigeria 2022

RRichest People
Want to know the richest Alfa in the country presently? You’re at the right place. This page reveals…
CCelebrities
This article features Jidenna net worth, biography and music. Read on to learn about this highly talented…
CCelebrities
The Nigerian music industry has experienced a boom in the last 3 decades. Some artists have gained global…
CCelebrities
Are you searching online for Don Jazzy’s net worth in 2021? You’re at the right place. This…
RRichest People
Advertisements Davido and his father, Adedeji Adeleke The name “Adeleke” is one of those known for wealth…
RRichest People
Who are the top richest actresses in the Nigerian movie industry? You asked. Advertisements This holds the…