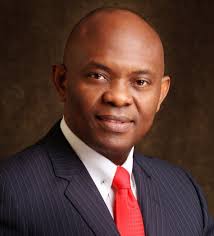 Born and bred in Africa, Tony Elumelu is one of the greatest entrepreneurs, economists and philanthropists Africa has ever seen. His passion to see young entrepreneurs rise from the African continent is second to none.

However, what is so special about this man is not even the fact that he is one of Africa’s most influential men. Or the fact that he is committed to seeing Africa as a whole develop. No!
What is so special about this man Tony Elumelu, is the fact that his success story is a proof that anybody can rise from the background of life to the forefront. Anybody I say.
Let me show you how.
The man Tony Elumelu was born as Tony Onyemaechi Elumelu on the 22nd of March, 1963 at Jos, Plateau State, Nigeria. His parents Mr. Dominic and Mrs. Suzanne Elumelu hailed from Onicha-Ukwu in Delta State, Nigeria.
See also 4 Ways To Achieve Your Goals In Life
He got his first degree in Economics from Ambrose Ali University and then later attended University of Lagos where he got his master of science degree.
Apart from these two Nigerian universities, Tony Elumelu also attended Harvard Business School where he did Advanced Management Programme.
In 1993 Tony Elumelu tied the knot with the love of his life, a medical doctor by profession, Awele Vivien Elumelu. Together they have seven children.
Like every other African child, Tony Elumelu had his own share of life’s challenges that sometimes seemed insurmountable. But he never allowed these challenges deter him from his vision.
Mr. Elumelu was able to later acquire one of the struggling banks in Nigeria then, Standard Trust Bank and then changed it to one of the major banks in Nigeria as of that time.
Later in 2005, Tony Elumelu led the acquisition of United Bank For Africa (UBA). A bank that prior to that time operated as a single country bank. Today, United Bank for Africa is a pan-African bank having more than seven million customers in Africa and beyond.
In 2010, he founded Heirs Holdings. This was after his retirement from United Bank for Africa. Heirs Holdings as an organisation invests heavily in real estate, hospitality, agribusiness, healthcare, energy and financial services. It was in this same year he founded Tony Elumelu Foundation. A philanthropic organisation that trains and supports thousands of young entrepreneurs from all over Africa yearly.
In 2011, Tony Elumelu together with Heirs Holdings, acquired a controlling interest in the Transnational Corporation of Nigeria Plc (Transcorp). An organisation that also invests in real estate, hospitality, agribusiness, healthcare and energy. He was later made the chairman of this organisation.
In November 2013, Tony Elumelu made the headlines for making $123 million from November 1 to November 21. That is, one hundred and twenty three million dollars in only three weeks! You can google that.
Forbes magazine ranked him as number 7 in the 2017 list of top 10 richest Nigerians. Others in the list are Aliko Dangote, Mike Adenuga, Alakija etc. He is also among the 20 most powerful men in Africa in 2012 by Forbes Magazine.
New African Magazine also named him as one of the 100 most influential Africans in business. He was voted African Business Leader Of The Year by African Investor Magazine in 2006 and African Banker of the Year by African Banker Magazine.
In 2013, He received the Leadership Award in Business and Philanthropy from the Africa-America Institute. Benue State University awarded him an honorary doctorate of science degree and University of Nigeria, Nsukka awarded him an honorary doctorate of business administration.
He was also awarded a Lifetime Achievement Award at the 5th edition of the annual Economic Forum of the Ivorian National Council of Employees, CGECI Academy, (CGECI) at Abidjan in April 2016.
Mr. Tony Elumelu has also received several government recognitions. For instance in 2003, the Federal Government of Nigeria granted the title of Member of the Order of the Federal Republic (MFR). A national honour. In 2009, the president of Nigeria Umaru Musa Yar’adua asked him to serve on the Presidential Committee on the Global Financial Crisis. In 2012, he awarded the National Honour of Commander of the Order of the Niger (CON) for his service in promoting private enterprise. He has been very vital in several government economic policies.
Mr. Elumelu continues to make his money today from financial services, real estate, energy, hospitality and healthcare sectors. Over 3 thousand young entrepreneurs from Africa has benefited immensely from his philanthropy through his organisation, Tony Elumelu Foundation. According to him, many more will still benefit from it.
See also 5 Profitable Small Scale Production Businesses To Start In Nigeria And African Countries
If there is one thing I love about this man which I think every entrepreneur needs to learn from him, it is his ability to see opportunities where others would hardly see one and act quickly to take advantage of it.
From the acquisition of Standard Trust Bank, to the acquisition of the United Bank for Africa (UBA) and Transnational Corporation of Nigeria (Transcorp). To the establishment of Heirs Holdings. Tony Elumelu continues to be an example of a man who knows when and where to invest his money for maximum yield.
His life as an entrepreneur also proves the point that with enough hardwork, commitment, dedication and knowledge, even a local company or organisation can be turned into an international one that reaches a wide range of people.
He is today a role model to so many entrepreneurs, both young and old. From Africa and beyond.
Thanks for reading.
Ref: Wikipedia.
Did you find this article helpful? Feel free to share it on social networks through the SHARE buttons below.
If you have any comment or question regarding this post, feel free to let me know through the comment section below.
Total
0
Shares
Share 0
Tweet 0
Pin it 0
Share 0